Nature’s  *anti cancer tree. Please note : It is highly recommended that this product is taken in conjunction with Moringa Leaf Powder which is also available from BIO-SIL in various forms and Turmeric powder or capsules.

Benefits:  Nature’s  *anti cancer tree.  The graviola tree provides a miraculous natural cancer cell destroyer, reported to be many times more effective than chemotherapy. This tree is called graviola in Brazil, guanabana in Spanish and has the uninspiring name “soursop” in English. 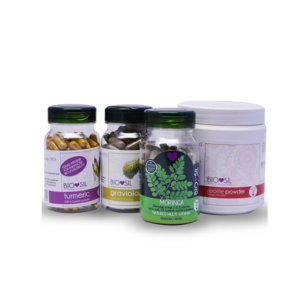 Further information:  The active anti-cancer phytochemical Annonaceous acetogenins has the properties to specifically attack and inhibit some enzymatic processes that occur only in the cancer cells’ membranes and while they are toxic to the cancer cells, they do not create any toxicity in healthy cells.

The National Institute for research on cancer of the United States of America in 1976 showed, in various laboratory experiments, that the active phytochemical Annonaceous acetogenins present in the graviola leaves acts specifically against several cancer cells such as carcinoma cells of the lung, adenocarcinoma of the prostate, cancer cells of breast, liver and pancreatic carcinoma.

Further studies made in Taiwan have shown that the Annonaceous acetogenins is effective also against ovarian cancer cells, bladder cancer and in some types of skin cancer.